हे पृष्ठ मराठी मध्ये सध्या उपलब्ध नाही.
If you would like to help translate this site please click here.

1) Playback Azimuth Connect the Left and Right outputs to a double beam CRO or other means of checking phase between channels. Play Azimuth Test Tape and adjust the "P/B Head Azimuth Screw C" (Fig.6-4-2) for maximum amplitude from both channels and minimum phase difference between them.

a) Connect an a.c. voltmeter to TP11 /TP12. (Fig 6.2) Play the Standard Level Test Tape and adjust R115/R215 (Fig 6.2) to obtain 245 mV at each Test Point. Note: This sets the level into the Dolby Decoder, and this voltage (245 mV) must be set when replaying the Standard Level Test Tape to be used as the Standard (0dB) regardless of the actual level chosen as Standard. This should be done whether or not it is intended to use Dolby as it sets a standard replay level for the remainder of the adjustments. (Note: The signals on TP 11 and TP 12 fluctuate independently with variations of the signal off tape. If possible check they are close to identical over a period of time by such means as a double beam CRO.)

b) Connect the a.c. Voltmeter to the Left channel output (RCA jack). Play the Standard Level Test Tape and adjust the Output Control (Front panel) to obtain 316 mV. This is the nominal input/output level. (-10 dBV), (-7.8 dBu approx). However, under this condition the meter will not read 0 – ignore this! Leave the Output Control at this setting for the remainder of the checks and adjustments. Adjust R201 to obtain the same level from the Right channel output, (R201 is on the board called VR PCB Assembly in Fig 6.1, Volume PCB Assembly on Circuit Diagram.)

3) Playback Frequency Response. Replay the Frequency Response Test Tape and adjust R116/R216 to obtain the minimum difference between the Reference Frequency (315 Hz, 400Hz, 1 kHz) of the tape being used, and 10 kHz. Check that the response is within the limits of fig. 6.7.

Note 1: Take into account any correction figures for the calibration of the Test Tape.

Note 2: The response at 10 kHz may be set a little lower than at the reference frequency, provided it is still within specification, if this is necessary to avoid levels much above 0dB at the mid frequencies (2 - 6 kHz) or at the high frequencies (12.5 - 20 kHz).

4) Minimum Input Level. Connect Audio Oscillator to the INPUT connectors (Rear, RCA). Apply 126 mV and check that an output of 224 to 447 mV can be obtained.

5) Nominal Input Level. Apply 316 mV at the reference frequency. Adjust the Input Controls (Front Panel) to obtain 316 mV at the outputs. Check that the same level is obtained at both channel outputs. Leave the Input Controls at this setting for the remainder of the checks and adjustments. Note. Although the two Input Controls are ganged together by a belt, they can move relative to each other if sufficient force is applied. It may be necessary to adjust their ganging to satisfy the above test.

b) With the OSC switch on, operate the 400Hz/10kHz switch. Adjust R325 (Fig 6.1) for minimum difference between readings. (Remove bottom cover for improved access to R325).

8) Phones Output Level. With 316 mV applied to the Input (Rear, RCA), check that a level greater than 891 mV (-1 dBV) can be obtained for each channel of the Phones output (with specified load).

Note 1: For GRN use it is only necessary to set up the recorder for "Normal" tape. Use a tape of the type for which it is desired to set up the recorder, and ensure that the TAPE switch is always in the "NORMAL" position. If for some special application it is necessary to use CrO2 or Metal tape, carry out this procedure with the appropriate TAPE switch operated, using the appropriate tape, and the corresponding adjustment points.

Note 2: Although in GRN the recorder will normally be used with the ADJ switch "On", the adjustments must be done in accordance with this procedure ( ADJ Switch "OFF") and then the ADJ switch set to "On" because the Record Equalization is in operation regardless of whether the ADJ switch is "On" or "Off".

13) Record Azimuth: Check that the Playback adjustment is correct before proceeding with this adjustment. Connect Audio Oscillator to the INPUT connectors (Rear, RCA). Apply a 6.3 kHz signal in the range 32 - 56 mV (15 - 20 dB below 316 mV) so that it is not affected by any limitation on the level, which can be recorded at high frequencies. Connect the Left and Right outputs to a double beam CRO or other means of checking phase between the channels. Adjust the "REC Head Azimuth Screw D" (Fig 6.4.2) for maximum amplitude from both channels and minimum phase difference between them.

14) Record Bias. Connect a suitable measuring instrument to the output. Apply a 6.3 kHz signal in the range 32 - 56 mV (15 - 20 dB below 316 mV). Start recording and set R101/R201 (on the motherboard Fig 6.1) to the extreme Counter Clockwise setting. Carefully adjust them Clockwise past the point of maximum signal output to the point where the output is 4 dB below the maximum value.

16) Record Equalization. Apply a 1 kHz signal to the input in the range 32 - 56 mV (15 - 20 dB below 316 mV). Start recording and adjust R104/R204 (Fig 6.1) so that the level of the output, when the input frequency is changed to 10 kHz, is the same as the output for 1kHz. Record and replay a range of frequencies at this level to determine the Overall Frequency Response.

17) Compliance with Specification. Check the remainder of the Characteristics listed in the specification to ensure the Recorder is operating satisfactorily.

Standard GRN practice is to use the Tascam 122 Mk. II in the "ADJ" mode. This allows the recordist to optimise the recording characteristics for each individual cassette. First, the recorder must be set up as explained above. Then the following Operational procedure should be used.

1) Put the deck in the Record/Pause mode by pressing the Record and Pause buttons.

2) Press the OSC button and set the signal to 400 Hz, then press the ADJ switch.

5) Set the Output selector to REPRO.

7) Slowly turn the BIAS trimmers Clockwise so that the VU meter needles deflect to the peak value, adjust one at a time.

8) Turn the REC LEVEL trimmers so that the VU meters read 0VU.

9) While recording, alternate the oscillator signal between 10 kHz and 400 Hz, and adjust the BIAS trimmers by rotating Clockwise so that the VU meters show the same level at both frequencies.

10) Set the oscillator signal back to 400 Hz and adjust the REC Level trimmers so that the VU meters read 0VU.

Note 1: This procedure should be carried out for each cassette to be recorded, even though they are of the same type.

Note 2: If a different type of tape is used, it may be necessary to readjust BIAS and possibly RECORD

These take the form of a 14 pin DIL package which contains 4 solid-state switches. Tascam uses them to switch audio connections. A positive voltage on the control pin (i.e. pin 6) causes the connection (in this case between pins 9 & 8) to be an open circuit. Application of a negative voltage to the control pin causes a low resistance path (typically 50 – 60 ohms) between the other two pins.

a) Output switched "REPRO” Meter reads level after “Output” control, as it is connected to Output. Output Signal is off tape, "Output" control in circuit. Output of Replay head, through Dolby, through U119 (8-9) (Switch), output control, U125 (Amp) to RCA output. From U125 (amp) output via U124 and U123 to the XLR OUTPUT (Balanced output).

b) Output switched "INPUT" Meter reads input signal via Input level control and monitor output of Dolby encoder, not affected by Output Control. Output is monitor output of Dolby encoder, via "Output" control, U125 (Amp) to RCA output. From U125 (amp) output via U124 and U123 to the XLR OUTPUT (Balanced output). Output signal is not what goes to Meter.

b) Output switched "INPUT" Meter reads input signal via Input level control and monitor output of Dolby encoder. Not affected by Output Control. Output is via Output control U 125(Amp) to RCA output. Balanced output via U124 and U123 to the XLR OUTPUT

c) OSC switched IN Operating the "OSC" switch disconnects the input from U122 and instead connects the built-in oscillator, which provides the "input" for setting up the "Adjustment" mode of recording. The "OSC" switch also adjusts the sensitivity of the meter circuit to match the output of the Oscillator (approx - 20 dB)

B. Details of Signal Paths.

Note: In some places connections appear to be reversed L to R on circuit drawings. Also, there is a lack of consistency in the numbering of plugs and sockets on the boards. Most of the detail is for Left channel only, details of the Right channel have to be inferred.

f) From pin 21 of U156, the “Encode out” goes via C174 to pin 1 of J154 and P120 back to the Mother board, then to pin 5 of P101, to pin 3 of 3pin connector on Adjustment VR PCB Assy, to top of R303, "L Level" adjustment. Moving arm of the pot. goes to pin 4 of P301 and J301 into Joint PCB Assy. From there via pin 17 of J302 and P302, into Adjustment Switch PCB Assy, to the normally open contact of the "ADJ IN" switch. The normally made contact comes from a fixed resistive divider across R303 via pin 3 of P301 and J301 via pin 18 of J302 and P302. Lever of "ADJ IN" switch goes to pin 1 of "lower" socket on Adjustment Switch PCB Assy, shown on the circuit diagram as going to pin 2 of P101 on the Motherboard. However, this is labelled "R", so it perhaps should be pin 3? The pair of pins on P119 and J153 labelled "Rec Level (L)" and the pair labelled "Rec EQ" are connected to one half of Op ampU152. Also connected are three level adjustments, one for each tape type and three EQ adjustments, one for each tape type. These are selected by solid-state switches in response to the logic circuits and front panel switches.

g) The signal then goes to the time constant networks where solid-state switches controlled by the logic circuits apply the appropriate characteristic together with U151. The signal then passes thru the bias trap, has the bias added, and goes to the Record Head. The bias is generated in, and the level controlled by, U160, in accordance with the “HX PRO” characteristic. The nominal setup level for various tape types, and for operating in the “ADJ” mode, are set by d.c.voltages applied to U160. 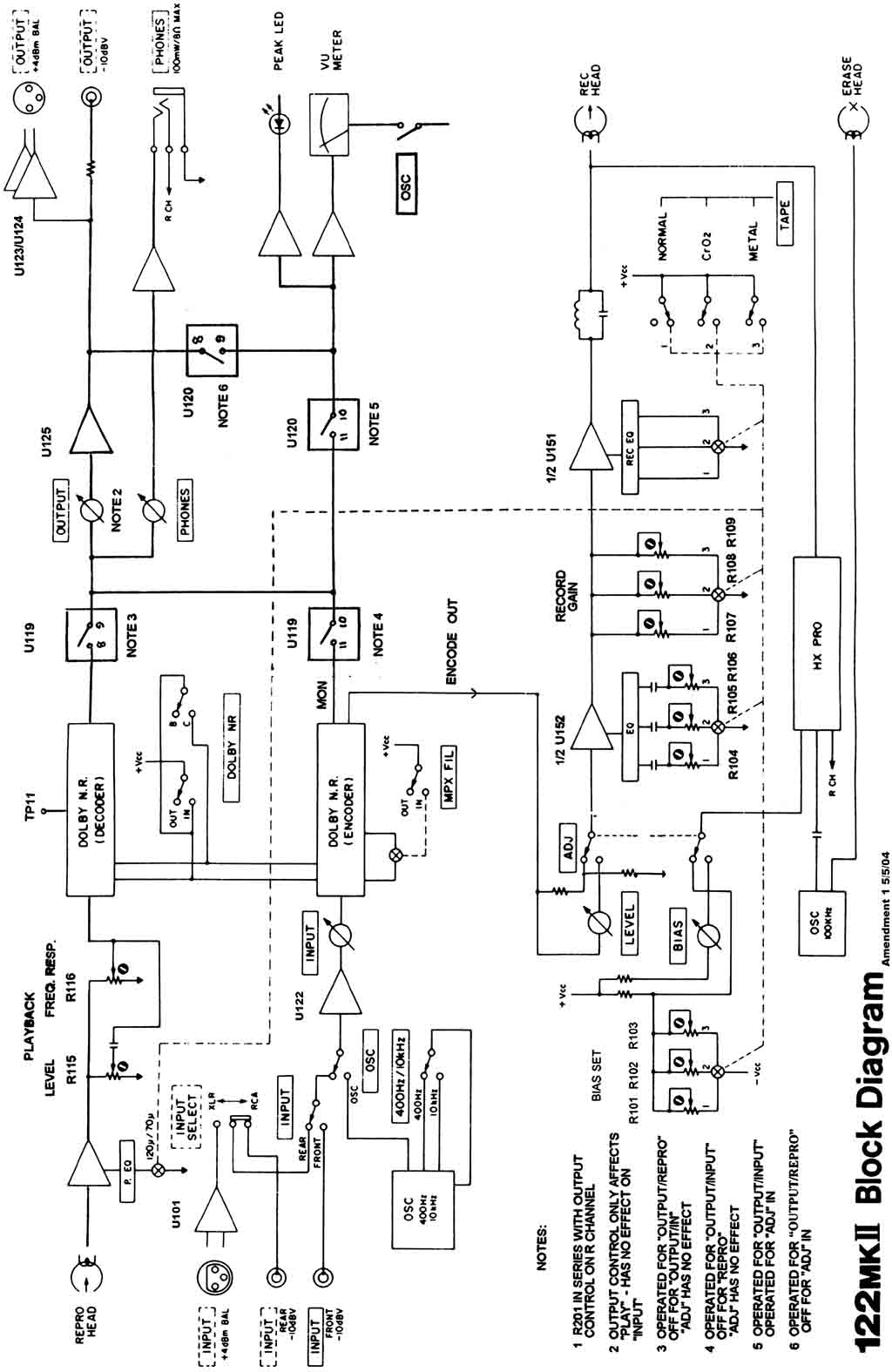 Click here for a full sized block diagram to save for printing. (For full detail, print from a graphics program not a web browser.)