Kenny and Joan....Leading the work in the UK

Kenny & Joan McKee have been with Language Recordings UK since 1998, after completing 3 years at Bible College. They originate from Northern Ireland and in 1991 their lives changed around when they became born again believers. Shortly after that their son Chris and daughter Louise became believers too. In 1995 they believed the Lord wanted them to stop their business of 25 years and step out in faith, sell their home and go to Bible College. They were so excited that God wanted to use them in some way.

They moved across the Irish sea to Cheshire in England and spent 3 years training and learning Gods Word. Kenny said, "During these three years we didn't know what the Lord had planned for us, we just enjoyed every minute of this great experience." One thing they wanted was to take the "Good News" to people who had never heard it before, and give them new life as The Lord had given them.

"We had heard about Language Recordings through close friends and at the end of our time at Bible College we joined Language Recordings UK and moved down to the UK office in High Wycombe, near London." The vision of reaching out to those in their own language really appealed to them. Kenny trained as a recordist in Nepal and the whole learning experience really challenged him. There he met people who had never heard the name of Jesus before. He did his 12 week training with his close friend David McKechnie. It was so exciting and thrilling to learn the skills of a recordist, to meet so many new people and to experience living in a new culture. One of the highlights was hiking in the mountains and visiting remote people groups.

After the recordist training was finished we began recording from our base at the UK office. In those days we were still using the Nagra Recorder and had fun with the editing process. Soon we progressed to new recording equipment and started editing work on computer. We were able to make lots of new recordings with foreign language speakers living or visiting the UK. 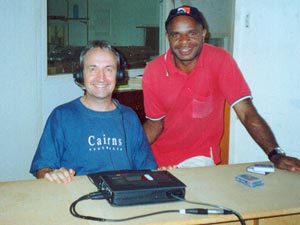 Later Kenny & Joan travelled to various countries doing recordings in many languages. Everywhere they went they fell in love with the people and were so blessed to spend time with so many other folk from different language groups.

In the year 2000, they headed off to Papua New Guinea to help train and encourage a young national guy called Nickson Soal. They worked from a Bible College complex and met lots of students from every part of PNG. We were encouraged by a reading from Ps139 which said, "if I settle on the far side of the sea, even there your hand will hold me fast." This encouraged us to know God looks after us no matter what part of the world we travel to.

A recording facility and office was set up and for nearly 3 years they travelled with Nickson to many regions of the "land of the unexpected" recording in lots of languages there. Again they fell in love with the many people they met and their hearts are still there. Again they were so blessed by the lovely folk of PNG.

After the most wonderful time working and serving in Papua New Guinea they came back to Northern Ireland and commenced their recording work in Eastern Europe again and also promoted the work of the mission in the UK.

A Return to Old Stomping Grounds

In March 2007, Jim and Irene announced their decision to leave the Mission, much to everyone's surprise. The Board suggested that Kenny & Joan move back to the UK office to oversee the work yet still continue with their recording programs.

This they have done and are really enjoying being here again in High Wycombe, the place where the Lord has called them to be. Kenny said, "we are so thrilled, excited and encouraged to see our recordings, flip-charts and booklets going out each week around the world." We want more people to know about the "precious treasures" we have available to reach the lost. 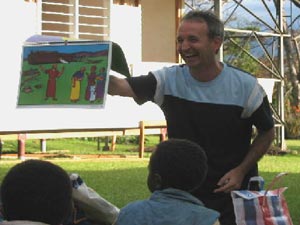 We are so thankful that we have a great Board for the work of the Mission and they are a lovely team to work and partner with. They meet and oversee the work and encourage and administer wisdom into many situations. We are so grateful to them for their prayers, support and commitment.

We also have some brilliant volunteer workers who come in faithfully every week. Peter and Anne have been serving the work here for many years and are always so enthusiastic. They simply love to serve in the Lord's work. They are a great encouragement to the rest of us. We also have Eve who is our finance lady and she comes in each week and works miracles with the financial side of things. She brings great experience and joy to the mission here and we love to see her each week. And John Taylor puts together our bi-monthly prayer guide.

Kenny concludes, "Everywhere we have gone we have known the Lords leading, blessing and encouragement and are so excited about what He has planned for us and the work of Language Recordings UK in the future".

We as a Mission continue to Praise the Lord everyday for His goodness to each one of us and our families and for His blessing in this great and unique ministry. Thank you for your prayerful and financial support and encouragement. We are all in the same team as we partner together to see souls into The Kingdom.... God Bless You.